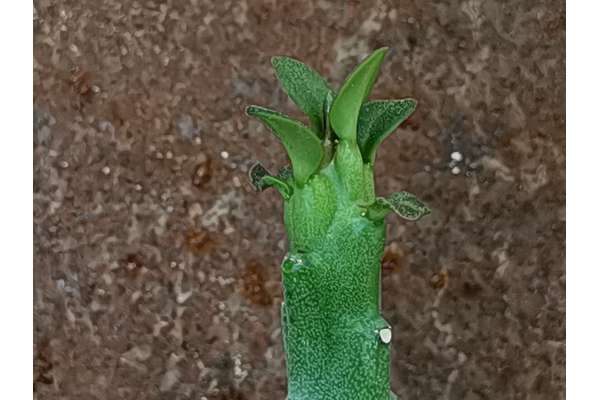 Often considered incorporated among the species of Boucerosia, however it is still recognized as a genus in its own right consisting of only one species, Frerea indicates; the name was chosen in honor of the governor of Bombay, Henry Bartle Frere, to encourage scientific and botanical research in India, the origin area of this peculiar succulent. It is a very rare plant, which grows exclusively along the rocky fissures of specific Indian forests, which is why it is extremely sought after by collectors. Compared to the succulents of the same family, Frerea has much longer stems, which tend to prostrate and fall back giving rise to extravagant waterfalls wavy and twisted. One of the main characteristics of this genus, which distinguishes it already at first sight from the other Asclepiadaceae, is the presence of abundant flat and elliptical foliage along the stems: the latter, however, tends to fall during the driest season, to allow the drums to retain as much moisture as possible. That’s not all: in nature Frerea adopts a further stratagem to defend the water contained in its stems, that is to cover its epidermis with a sort of silvery layer, which allows it to reflect the sunlight and avoid dissipating moisture! One of the strong points of Frerea is undoubtedly the inflorescence: at the end of summer, in fact, the stems of this succulent are adorned with wonderful star-shaped flowers, of a pleasant velvety texture that is tinged with spectacular bright red hues spotted yellow!