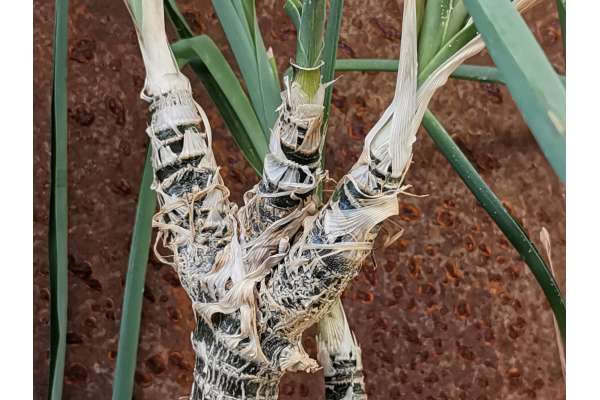 Trachyandra is a very peculiar genus, difficult to find and perhaps for this reason even more sought after and admired. Its name comes from the Greek and literally means "rough male", in reference to the particular wrinkled covering of the stamina, that is the male part of the inflorescences. These are generally herbaceous plants that do not reach remarkable heights, but enchant with the games of shapes, colors and dispositions of their foliage. Considered in many respects similar to the genus Albuca, it has in common with the latter the same bulbous root, sometimes partially exposed outside the soil, and the same growing habits: in fact, they are both succulent to winter growth, which generally tend to lose their leaves in the hottest periods to go into vegetative rest and regenerate new stems in the following season. The strength of this genus is without doubt the foliage, characterized by long and slender nastriform leaves that, depending on the species, assume decidedly original course: the most peculiar and, at the same time, most sought after case is T. tortilis, in which the foliage gives rise to extravagant games of curls and waves, impossible not to notice! Another feature that makes Trachyandra enormously appreciated is its simplicity of cultivation, able to satisfy even novice collectors: this succulent loves bright areas and highly draining soils, moderate watering which is advisable to stop completely when going into vegetative rest. A few simple moves, then, and Trachyandra will delight you with clusters of wonderful white inflorescences with darker streaks along the petals, which will create with the foliar extravagances an absolutely unique contrast!