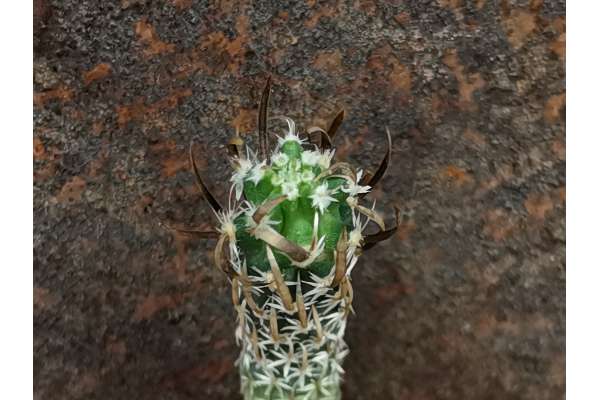 Toumeya is a genus of plants belonging to the family Cactaceae. It is one more genus that confuses botanists: depending on the classifications it is considered a genus in its own right or simply a synonym of "Sclerocactus". With the unmatched beauty of the Sclerocactus, in fact, the Toumeya have much in common: they are cacti that take on a globular or cylindrical shape, whose dark green trunk is furrowed by about twenty or so ribs bristling with long, sharp, rigid thorns: be careful when handling them! Unlike Sclerocactus, however, in the species called Toumeya, instead of thorns, you can see yellow formations, similar to paper tentacles, which arise in groups or individually from areoles and can also become so dense as to cover the entire plant (such as in T. papyracantha). The genus Toumeya, in fact, was proposed by Britton and Rose, two botanists, in 1922, to include a single rare species of cactus: the current Toumeya papyracantha, also called Mammillaria papyracantha or Sclerocactus papyracantha. This species is called papyracantha, from papyrus, precisely because of the papery consistency of its thorns. This transformation of the thorns can be seen, in a slightly different form, also in Toumeya macrochele, where however the "tentacles" are much shorter and whitish. Both of them, however, keep also some radial, normal thorns, white and short. Toumeyas make beautiful colorful flowers, which sprout in Spring, during the day, and close at night. These cacti will give you a lot of satisfaction with their beautiful flowers, just follow some tips to make them grow healthy: Exposure to sunlight should be direct or, at most, allow some partial shade. These cacti require well draining substrates with a strong mineral component to develop. Being native to desert habitats, they are very resistant to cold: they survive, for short periods and if the soil is kept dry, even at temperatures of -10ºC! Water them carefully: regularly in summer, less and less in autumn until suspending completely the water supply in Winter, to avoid the onset of rot. Toumeya propagation is, in theory, carried out by seed, at temperatures between 17 and 40ºC. However, these seeds would require scarification and germinate very slowly and rarely. Often, therefore, these plants are grafted on top of other plants, for example some species of Opuntia.