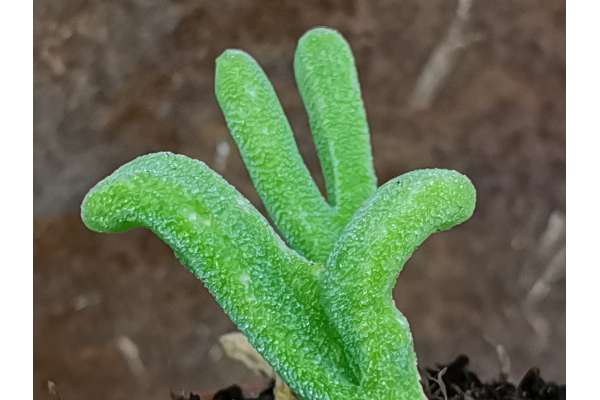 The name of this extremely original genus derives from the Latin and literally means “necklace, string of pearls”, referring to the thread-like leaves ending at the base in a sort of pearl that surrounds them. It is a small bushy plant, which develops with short broad and strongly branched stems, with an almost woody appearance due to the leaf sheath that covers them. This plant is common to everyone and also nicely known as the "succulent rabbit" for its cylindrical leaves that grow in pairs from each "pearl", thus making it similar to bunny's ears! Accustomed to growing along the South African rosy shrubs, in our hemisphere Monilaria is a perfect winter-growing plant, which will delight your gardens and your pots in cold periods, when other succulents will tend to go dormant: its large white flowers will be a fantastic breath of elegance in the middle of the bright green of the cute "bunny"! Here are some tips for its cultivation: It loves sunny and ventilated spaces. It prefers mild temperatures between 10 and 25 ° C, but some species resist well even to lower temperatures. Regular but moderate watering is recommended in winter, only when the soil is completely dry. In summer it is preferable to further reduce the water supply. A very draining substrate is optimal, consisting of specific soil for succulent plants to which a part of inert material is added, such as pumice or sand, to make the soil even more porous. It does not need frequent fertilization, it will be sufficient to dilute fertilizer with watering once a year.