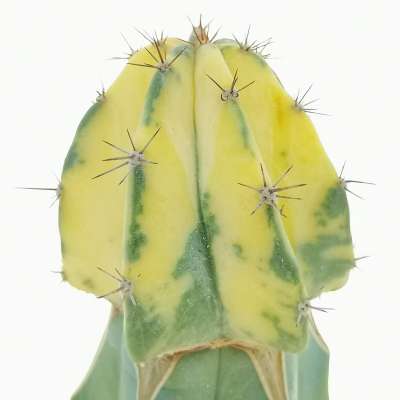 The variegated shape of this cactaceae presents the typical yellow zones in the exact points where the chlorophyll is absent; such zones will never be identical from one plant to another, thus making each exemplar absolutely unique and, for this reason, very sought after by collectors. Sometimes considered synonymous with Stenocereus pruinosus, this cactus has columnar and little ramified posture that, in nature, reaches remarkable dimensions (up to 7 metres of height!). Its stems are green, covered by a waxy-itchy epidermal layer that protects them (hence the name of the species). It is formed by ribs separated by wide intervals and equipped with wavy margins, and by grey-brownish thorns, rather short and sparse (each areola, present along the undulations of the ribs, has about 3 or 4 short and straight thorns). This cactus has the particularity of blooming its white-pink funnel-shaped flowers usually in May as well as in October, reason that has conferred it the common names of "pitayo de Mayo" and "pitayo de Octubre".