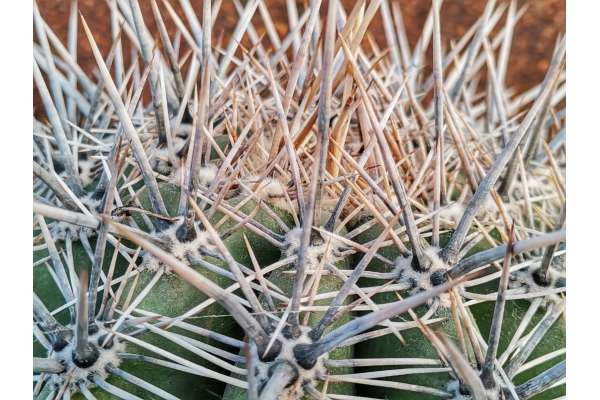 Its name was chosen in honor of Andrew Carnegie, a famous American philanthropist. It includes only one species, the Carnegia gigantea, commonly known as "Saguaro", which over time has become a real iconic plant, symbol par excellence of the desert landscape. It is an imposing columnar cactus, with a very slow growth but that can live up to three hundred years, reaching up to three meters in diameter and up to up to fifteen meters in height! It grows in the wild in a rather restricted territory, in the arid areas of Sonora, and has become such an important plant for the place of its origin that it has named the park within this desert - "Saguaro National Park". When young, the stem is solitary, cylindrical and with well spaced areoles, only after many decades the spines become thicker and the famous ramifications, by which it is more commonly known, can be formed, furrowed by deep ribs and strong spines that reach up to seven centimeters in length. Moreover, another important and noteworthy aspect is its snow-white waxy flowers, which bloom at night during spring and reach a considerable size: they are so beautiful and characteristic that they have become the symbol of the whole State of Arizona. Furthermore, for centuries the local populations have been exploiting this plant, known as "giant cactus", for the most varied purposes: sometimes the stems were opened to look for water (the big specimens are in fact able to store up to five tons of water!), the ribs were used to build fences and shelters, the seeds were considered edible, finally its juicy red fruits were used to prepare jams and inebriating drinks for ceremonies!