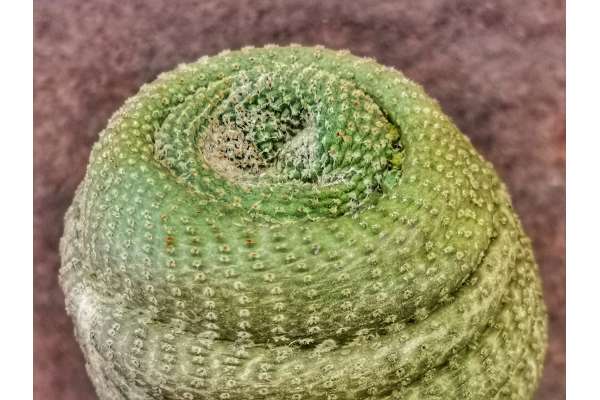 The genus takes its name from Jujuy, Argentine province where the first specimen was found. It is a genus consisting of a single species, Yavia cryptocarpa, a small cactus with a very slow growth and for that reason is really hard to find, that’s why it is considered rare and sought after. In nature it grows between rock cracks, hiding inside of those during the dry season and sticking out during rainy seasons in order to collect water: this behavior makes it extremely adaptable and resistant to the most inaccessible and wild environments! In spring this lil plant, which does not grow past two centimeters, is further hidden by adorable flowers with multilayered petals tinted in pink, that enrich it with a truly unique combination of delicacy and elegance. What is most striking at first sight is certainly the extremely symmetrical and orderly appearance of the cactus, due to its shape and the microscopic combed thorns that decorate the small cactus and make it one of the most particular of all, a true miniature masterpiece! Yavia's ability to hide underground to protect itself gives it another extremely positive feature: it is a plant that survives without problems in the most diverse climates, from scorching heat to freezing cold down to several degrees below zero. It is incredible to think that such a small specimen can be so resistant and adaptable to any climatic and environmental condition: let yourself be enchanted by the charm of this tiny thorny jewel with unparalleled qualities!