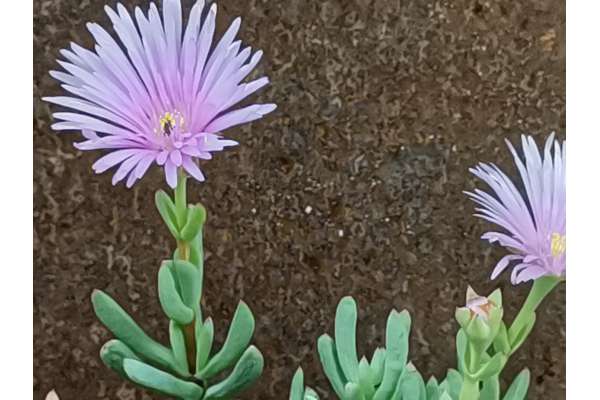 The name of this genus derives from the Greek and literally means "bright flower", in reference to the main characteristic of this amazing succulent. Otherwise commonly known also as "midday flower" due to the tendency of its lively diurnal inflorescences to open only during the sunny days, it is a recently recognized genus, which in the past was incorporated among the Mesembryanthemum species due to the similarity of the inflorescences. These pleasant succulents have a rather rapid growth, not exceeding the maximum 40 cm in height but often tending to carpet large horizontal spaces or to give life to thick bushes of a pale green, sometimes tending to gray or bluish depending on the species. Often its slender stems, covered with graceful fleshy leaves with a triangular or cylindrical section, tend to fall back or crawl to the ground. The real strength of Lampranthus is the spectacular inflorescence: in spring the soft bushes will in fact be completely covered with a cushion of showy daisy-shaped flowers in lively and bright colors, which can range from red to orange, from fuchsia to yellow. That's not all: the charm of its inflorescences will accompany Lampranthus for over a week, during which the flowers will fully blossom under the sun and then close again in the evening. Another advantage of Lampranthus is certainly the extreme ease of cultivation, in fact you just need to keep the plant in well-sunny and ventilated positions, watering it very moderately, to be surprised by its liveliness and brilliance!