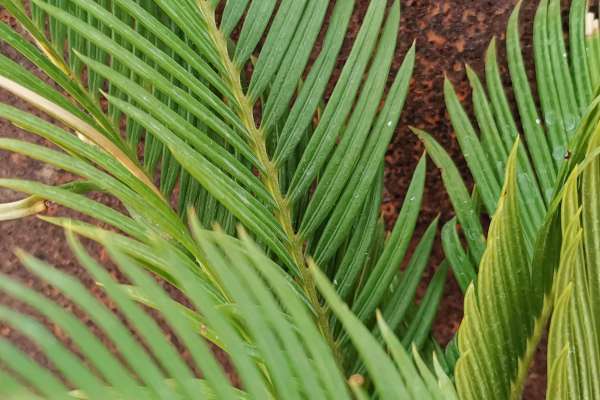 Its name derives from Greek and refers to palms, very similar to this species, which were widely spread in ancient times. It is unbelievable how these plants have survived unchanged for about two hundred million years: they were in fact already present in the Jurassic period, and their survival means that most of the plants of the past could have been studied, but now they are extinct! What has made them arrive so unchanged to the present days is certainly their extreme ability to adapt, in fact the Cycas do not require special care and resist harsh temperatures, even those much below zero degrees. These are shrub specimens, consisting of an unbranched stem, from whose apex ornamental pinnate leaves branch off; the leaves are very large and spirally arranged in a crown shape, generating an overall appearance very similar to that of palm trees. They have a rather slow growth, but they are extremely long-lived and in nature they can reach exponential dimensions. Although they hardly bloom in our latitudes, their general appearance in itself is very ornamental, perfect to give a touch of chic to your homes but also to make your garden majestic! Moreover, in the original countries this plant was cultivated for the particular flour that was extracted from its trunks, as well as the cooked seeds were used for food; in ancient times it was said that the leaves of Cycas, used as a fan, could take away malice. For all these uses and aspects, it is no coincidence that the Cycas symbolize royalty and firmness, referring to the strength with which these truly "living fossils" have been able to resist unchanged over centuries!