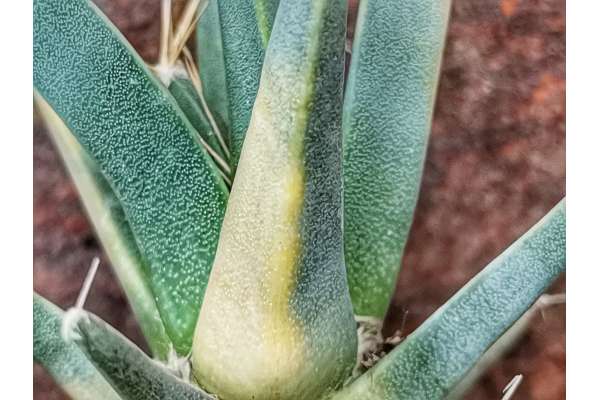 Its name was chosen in honor of Duke Maximilien of Leuchtenberg, a passionate botanist. Despite its long, triangular-section leaves very similar to those of the Agave, it is considered in this case to be a cactacea, which, although it may look very different in appearance, is considered closely related to the genus Ferocactus. Commonly called "prism cactus", because of the shape of its leaves, its cactus essence is mainly present in its foliage, which is green-glaucous, arranged in a rosette and equipped apically with areoles and spines of a papery consistency. It has an extremely ornamental and particular aspect, but in summer it is even more extraordinary with its central flowers, which color your spaces with petals, shaded from yellow to reddish, very striking and decorative! Here are some tips for its cultivation: It likes very bright places, however, avoid direct sunlight during the hottest hours of the day. It is preferable to keep it at mild temperatures and never below 10 °C, for this reason it is recommended to shelter it during the winter period. Water moderately but only when the soil is completely dry. It is enough to water it once a week in spring and summer, reduce watering to once every two months in autumn, and to suspend it completely in winter. The best soil is a well-draining one, even better if further enriched with inert materials such as pumice, sand or lapilli. They do not need frequent fertilization, it is sufficient to dilute the fertilizer with watering once a year.