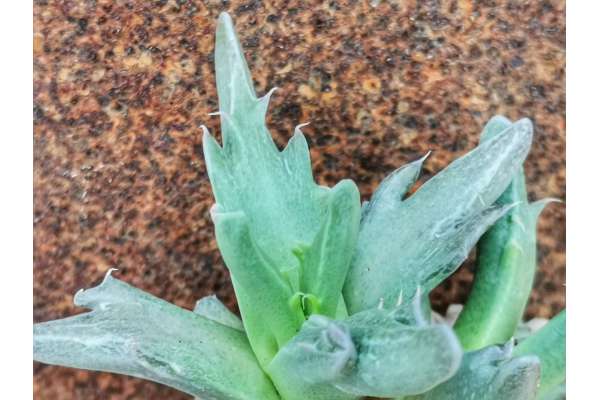 Its name derives from Latin and literally means "jaws", referring to the similarity of the leaves to ferocious mouths, due to their triangular and compact shape, with many small "teeth" along the edges. The foliage is usually grouped in a rosette and tends to extend, exploiting the available horizontal space (they reach only a few centimeters in height). The green-greyish shades, combined with the often lighter marginal teeth, create a decorative combination, which is accentuated during the flowering period by large inflorescences of the plant. The flowers have yellow, long and thin petals, that surround a characteristic central "button". It is highly sought after in our latitudes, because it is perfect for decorating small spaces with an exotic touch! Here are some tips for its cultivation: It requires a lot of light throughout the year, avoid direct sunlight during the hottest hours of the day. Keep it at mild temperatures, never below 10 °C. It is recommended to shelter it during the winter period. Water moderately but only when the soil is completely dry. It is enough to water it once a week in spring and summer, reduce watering to once every two months in autumn, and to suspend it completely in winter. The best soil is a well draining one, formed by a mixture of peat and pumice so that the water does not stagnate. They do not need frequent fertilization, it is sufficient to dilute the fertilizer with watering once a year.