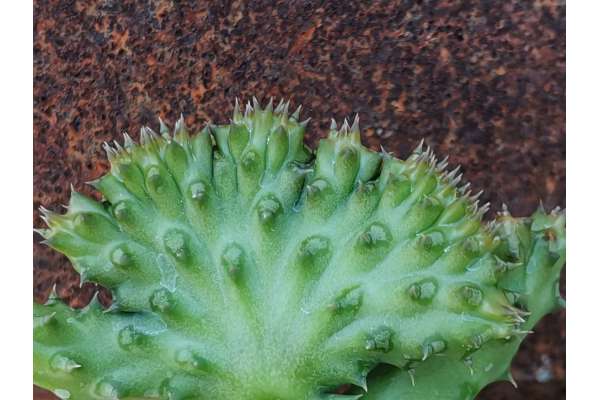 Its name was chosen in honor of Edith Cole, a scholar, who collected this plant's species at the end of the 19th century on a botanical expedition to northern Somalia. It is a succulent, formed by perennial stems, very branched, with no leaves, with small hard and thorny "teeth" instead. The peculiarity of this plant is undoubtedly the imposing flower, for which it is commonly called "Flower of the Persian carpet": it is in fact very large, compared to the plant itself. The flower represent an external five-lobed corolla and a smaller internal one, which generally assume two different colors, enriched with streaks and spots just like a Persian carpet. The crested form of Edithcolea is even more sought after and is considred more precious, it is generally cultivated in greenhouses, and comes out with very varied and lively colors, in which the teeth stand out harmoniously to highlight the species, from which this striking crest comes!