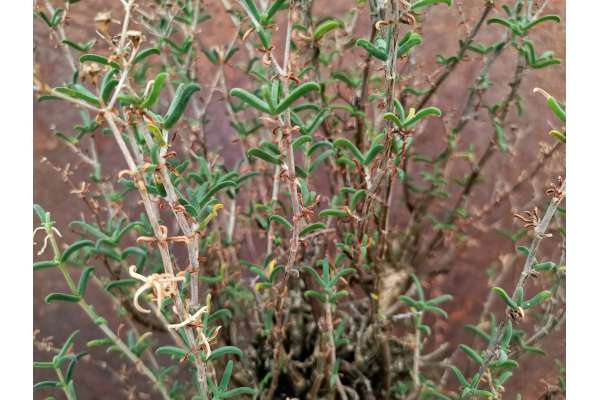 Also commonly known as the "donkey fig", as it is used as food for these animals in the extremely arid areas, from which it comes. The common feature of the species of this genus is undoubtedly its massive and particular caudex, consisting of reddish roots, twisted together to create unique and highly ornamental shapes: you will never find two identical plants! The caudal trunk grows very slowly and, in addition to the particularity it gives to the appearance of the plant, it is also very useful as a water reserve. Thus Mestoklema is highly appreciated and sought after by bonsai lovers, due to its appearance of a "miniature tree" and also to its adaptability to different places and climates: even inexperienced enthusiasts will have no difficulties in taking care of this succulent caudiciform! Here are some tips for its cultivation: It likes an exposure to full sun in rather airy locations. It prefers rather mild temperatures, however it still survives even at temperatures close to freezing if the soil is dry. Water moderately and only when the soil is completely dry. It is enough to water it once a week in spring and summer, reduce it to once every two months in autumn and to suspend it completely in winter. The best soil is a well-draining one, even better if further enriched with inert materials such as pumice, sand or lapilli. They do not need frequent fertilization, it is sufficient to dilute the fertilizer with watering once a year.